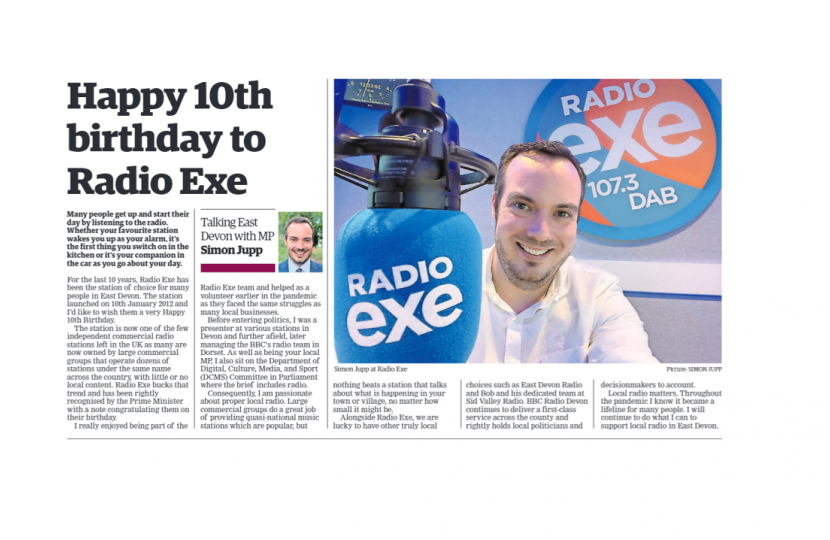 Many people get up and start their day by listening to the radio. Whether your favourite station wakes you up as your alarm, it’s the first thing you switch on in the kitchen or it’s your companion in the car as you go about your day.

For the last 10 years, Radio Exe has been the station of choice for many people in East Devon. The station launched on 10th January 2012 and I’d like to wish them a very happy 10th birthday.

The station is now one of the few independent commercial radio stations left in the UK as many are now owned by large commercial groups that operate dozens of stations under the same name across the country, with little or no local content.

Radio Exe bucks that trend and has been rightly recognised by the Prime Minister with a note congratulating them on their birthday.

I really enjoyed being part of the Radio Exe team and helped as a volunteer earlier in the pandemic as they faced the same struggles as many local businesses.

Before entering politics, I was a presenter at various stations in Devon and further afield, later managing the BBC’s radio team in Dorset. As well as being your local MP, I also sit on the Department of Digital, Culture, Media, and Sport (DCMS) Committee in Parliament where the brief includes radio.

Consequently, I am passionate about proper local radio. Large commercial groups do a great job of providing quasi-national music stations which are popular, but nothing beats a station that talks about what is happening in your town or village, no matter how small it might be.

Alongside Radio Exe, we are lucky to have other truly local choices such East Devon Radio and Bob and his dedicated team at Sid Valley Radio. BBC Radio Devon continues to deliver a first-class service across the county and rightly holds local politicians and decisionmakers to account.

Local radio matters. Throughout the pandemic I know it became a lifeline for many people. I will continue to do what I can to support local radio in East Devon.

It’s a truly wonderful school with the community at its heart. I’m looking forward to welcoming one of the classes to Parliament later this year.