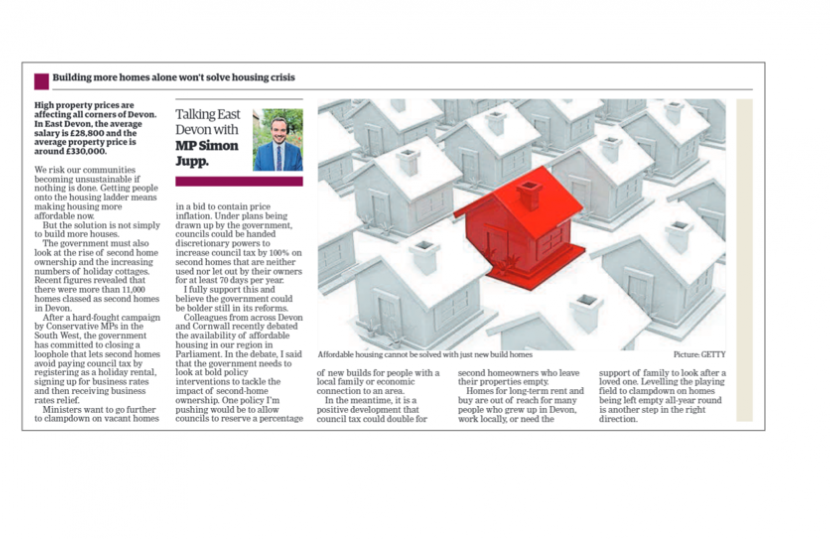 We risk our communities becoming unsustainable if nothing is done. Getting people onto the housing ladder means making housing more affordable now.

But the solution is not simply to build more houses.

The government must also look at the rise of second home ownership and the increasing numbers of holiday cottages. Recent figures revealed that there were more than 11,000 homes classed as second homes in Devon.

After a hard-fought campaign by Conservative MPs in the South West, the government has committed to closing a loophole that lets second homes avoid paying council tax by registering as a holiday rental, signing up for business rates and then receiving business rates relief.

Ministers want to go further to clampdown on vacant homes in a bid to contain price inflation. Under plans being drawn up by the government, councils could be handed discretionary powers to increase council tax by 100% on second homes that are neither used nor let out by their owners for at least 70 days per year.

I fully support this and believe the government could be bolder still in its reforms.

Colleagues from across Devon and Cornwall recently debated the availability of affordable housing in our region in Parliament. In the debate, I said that the government needs to look at bold policy interventions to tackle the impact of second-home ownership. One policy I’m pushing would be to allow councils to reserve a percentage of new builds for people with a local family or economic connection to an area.

In the meantime, it is a positive development that council tax could double for second homeowners who leave their properties empty.

Homes for long-term rent and buy are out of reach for many people who grew up in Devon, work locally, or need the support of family to look after a loved one. Levelling the playing field to clampdown on homes being left empty all-year round is another step in the right direction.

This column first appeared in the Exmouth Journal on Wednesday 18th May 2022 and in the Sidmouth Herald and Midweek Herald later in the week.