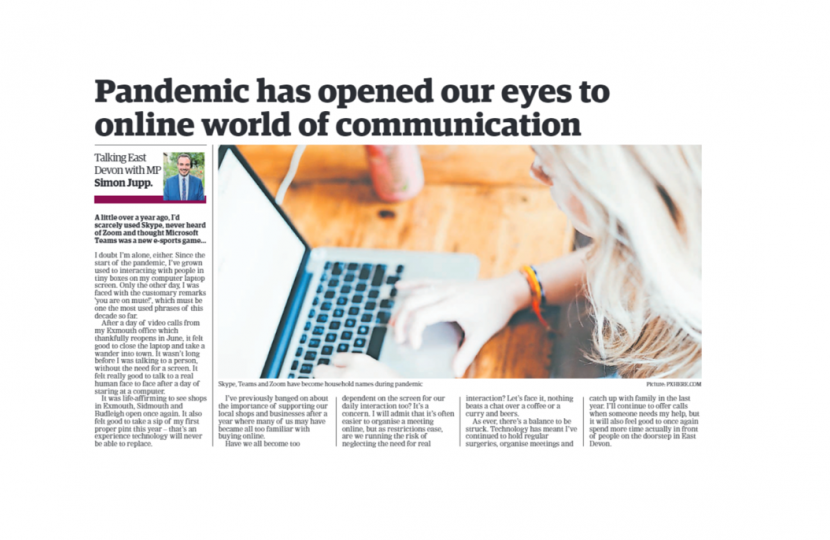 A little over a year ago, I’d scarcely used Skype, never heard of Zoom and thought Microsoft Teams was a new e-sports game…

I doubt I’m alone, either. Since the start of the pandemic, I’ve grown used to interacting with people in tiny boxes on my computer laptop screen. Only the other day, I was faced with the customary remarks “you are on mute!”, which must be one the most used phrases of this decade so far.

After a day of video calls from my Exmouth office which thankfully reopens in June, it felt good to close the laptop and take a wander into town. It wasn’t long before I was talking to a person, without the need for a screen. It felt really good to talk to a real human face to face after a day of staring at a computer.

It was life-affirming to see shops in Exmouth, Sidmouth and Budleigh open once again. It also felt good to take a sip of my first proper pint this year – that’s an experience technology will never be able to replace.

I’ve previously banged on about the importance of supporting our local shops and businesses after a year where many of us may have became all too familiar with buying online.

Have we all become too dependent on the screen for our daily interaction too? It’s a concern. I will admit that it’s often easier to organise a meeting online, but as restrictions ease, are we running the risk of neglecting the need for real interaction? Let’s face it, nothing beats a chat over a coffee or a curry and beers.

As ever, there’s a balance to be struck. Technology has meant I’ve continued to hold regular surgeries, organise meetings and catch up with family in the last year. I’ll continue to offer calls when someone needs my help, but it will also feel good to once again spend more time actually in front of people on the doorstep in East Devon.

This column first appeared in the Exmouth Journal on Wednesday 21st April and in the Sidmouth Herald and Midweek Herald later in the week.