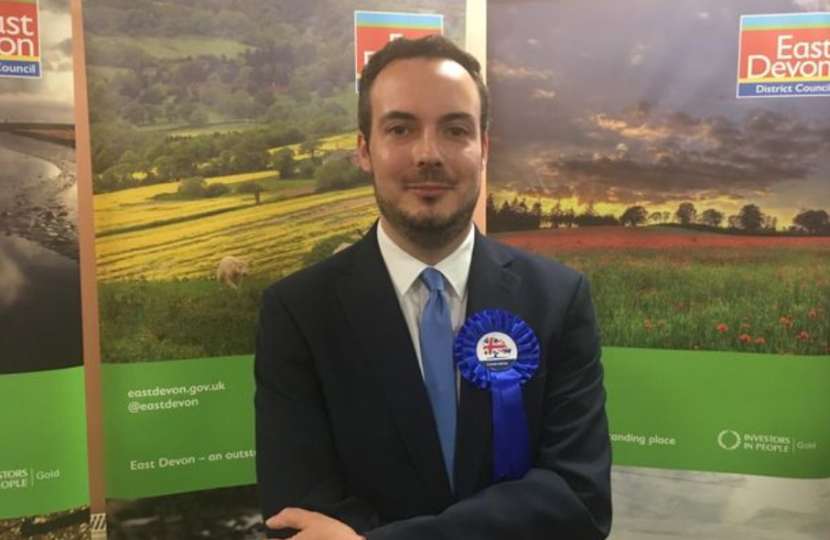 The last fortnight has been a whirlwind. Firstly, thank you for placing your trust in me. This was a hard-fought election and I’m delighted to have secured the highest share of the vote in East Devon in decades.

I’d like to take this opportunity to pay tribute to Sir Hugo Swire who served as our MP for nearly 20 years and was fondly remembered by so many people I met throughout the election.

After the election result (and some sleep!) I caught up with my family for a meal in a pub in Exmouth and was congratulated by many customers. It was a firm reminder of the important role I will play in standing up for our corner of the county.

I really enjoyed the campaign, knocking on doors in towns and villages across East Devon and hearing people’s priorities. Whether it’s protecting and strengthening our community hospitals, boosting education funding in our schools, improving our high streets or putting more police on our streets, I heard you and I’m keen to crack on and deliver.

As a new MP, the first few days involve induction sessions into Parliament covering every aspect of life as an MP including hiring staff, securing an office, meetings with Ministers, the Prime Minister and the all-important tour of the Houses of Parliament.

I have already started looking for an office in Exmouth and I can’t wait to open the doors for the first time, giving you the opportunity to pop in and speak to my staff and I about the issues which matter to you.

When my offices are setup and fully staffed, I will offer tours of Parliament because it’s an exciting experience to see the beating heart of our democracy.

The first week also involved a historic moment for our nation. We promised to Get Brexit Done, and we’ve delivered. After years of faffing around, Parliament voted for the Prime Ministers new Brexit deal, paving the way to leave the European Union and finally respecting the result of the referendum and the decision made by the majority of voters in East Devon.

I returned home after my first week in Parliament and met with the Chief Officer of Devon and Somerset Fire and Rescue Service. The final decision on the future of our fire stations will be made next month and I firmly pressed the case against a range of proposals which would reduce cover across East Devon.

Some of the options put forward in the public consultation earlier this year were unacceptable, and I will use every opportunity to ensure our communities are protected.

I promised to stand up for the services which keep us safe, care for those who need it and inspire the next generation. Whether you voted for me or not, I will work hard on your behalf and be a strong voice for East Devon. I would like to take this opportunity to wish you Merry Christmas and a Happy New Year.

If you are working over the festive period, thank you – if you aren’t, please spare a thought for those who are.