Weekly column: Why you may not be able to carry on at your convenience 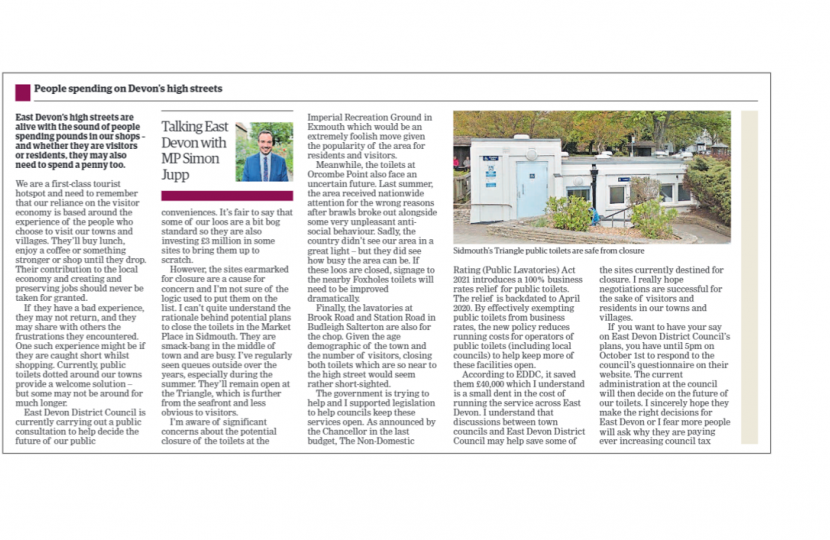 East Devon’s high streets are alive with the sound of people spending pounds in our shops – and whether they are visitors or residents, they may also need to spend a penny too.

We are a first-class tourist hotspot and need to remember that our reliance on the visitor economy is based around the experience of the people who choose to visit our towns and villages. They’ll buy lunch, enjoy a coffee or something stronger or shop until they drop. Their contribution to the local economy and creating and preserving jobs should never be taken for granted.

If they have a bad experience, they may not return, and they may share with others the frustrations they encountered. One such experience might be if they are caught short whilst shopping. Currently, public toilets dotted around our towns provide a welcome solution – but some may not be around for much longer.

East Devon District Council is currently carrying out a public consultation to help decide the future of our public conveniences. It’s fair to say that some of our loos are a bit bog standard so they are also investing £3 million in some sites to bring them up to scratch.

However, the sites earmarked for closure are a cause for concern and I’m not sure of the logic used to put them on the list. I can’t quite understand the rationale behind potential plans to close the toilets in the Market Place in Sidmouth. They are smack-bang in the middle of town and are busy. I’ve regularly seen queues outside over the years, especially during the summer. They’ll remain open at the Triangle, which is further from the seafront and less obvious to visitors.

I’m aware of significant concerns about the potential closure of the toilets at the Imperial Recreation Ground in Exmouth which would be an extremely foolish move given the popularity of the area for residents and visitors.

Meanwhile, the toilets at Orcombe Point also face an uncertain future. Last summer, the area received nationwide attention for the wrong reasons after brawls broke out alongside some very unpleasant anti-social behaviour. Sadly, the country didn’t see our area in a great light – but they did see how busy the area can be. If these loos are closed, signage to the nearby Foxholes toilets will need to be improved dramatically.

Finally, the lavatories at Brook Road and Station Road in Budleigh Salterton are also for the chop. Given the age demographic of the town and the number of visitors, closing both toilets which are so near to the high street would seem rather short-sighted.

The government is trying to help and I supported legislation to help councils keep these services open. As announced by the Chancellor in the last budget, The Non-Domestic Rating (Public Lavatories) Act 2021 introduces a 100% business rates relief for public toilets. The relief is backdated to April 2020. By effectively exempting public toilets from business rates, the new policy reduces running costs for operators of public toilets (including local councils) to help keep more of these facilities open.

According to EDDC, it’s saved them £40,000 which I understand is a small dent in the cost of running the service across East Devon. I understand that discussions between town councils and East Devon District Council may help save some of the sites currently destined for closure. I really hope negotiations are successful for the sake of visitors and residents in our towns and villages.

If you want to have your say on East Devon District Council’s plans, you have until 5pm on October 1st to respond to the council’s questionnaire on their website. The current administration at the council will then decide on the future of our toilets. I sincerely hope they make the right decisions for East Devon or I fear more people will ask why they are paying ever increasing council tax bills.

This column first appeared in the Exmouth Journal on Wednesday 1st September 2021 and in the Sidmouth Herald and Midweek Herald later in the week.