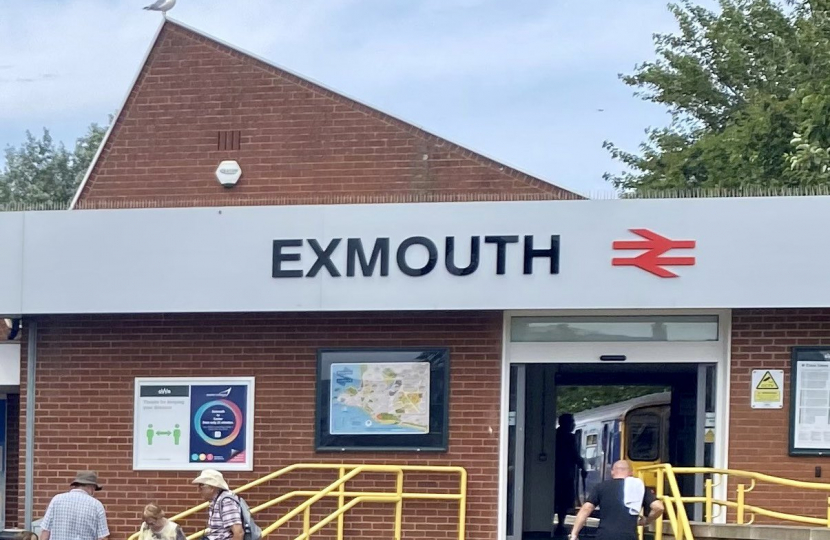 Many of us in East Devon use the railway regularly to get to school, work, or see friends and family. The railways also connect places including Lympstone, Whimple, and Cranbrook with Exeter. It’s a vital service for many, every day.

As readers will be aware, RMT union members are on strike this week in a dispute with Network Rail over their pay, staffing cuts, and working conditions. I'm concerned by the potential for this large-scale industrial action to continue over the summer, disrupting vital services, NHS appointments, and GCSE exams.

The government cannot support union demands for pay increases of 11%. As we know, there’s no such thing as government money – it’s your money. Despite £16 billion of emergency subsidy during the pandemic, the reforms necessary to make further funding sustainable are being blocked by militant unions.

The strike action is taking place on Tuesday 21st, Thursday 24th, and Saturday 26th June, with only a skeleton service on these days. The action has been designed for maximum disruption and the whole week will be severely impacted.

On the strike days, GWR says they are running some services on the Devon mainline to Paddington but these are starting late and finish early. GWR expects these will be busy. GWR is not running services along the Avocet line between Exmouth and Exeter. SWR are not running services west of Basingstoke, also known as the West of England line. That means no trains between Exeter and Whimple, Cranbrook and Honiton.

The scheduling for the intervening days looks better with services across the network akin to typical Sundays.

This is a staggering level of disruption – triggered by the unreasonable demands of left-wing unions and supported by the Labour Party. It cannot happen again. I sit on the Transport Select Committee, and I will be pressing the case for legislation requiring minimum service levels on the railway network.

Passenger numbers on the railways haven’t fully recovered from the pandemic. If we want to get more people to use public transport, we can’t let unions dictate when people can get to where they need to be.

This column first appeared in the Exmouth Journal on Wednesday 22nd June 2022 and in the Sidmouth Herald and Midweek Herald later in the week.