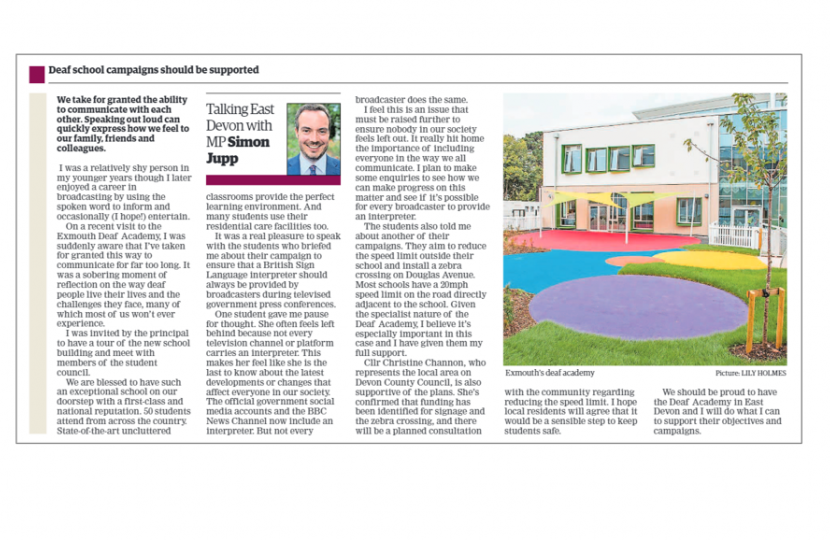 We take for granted the ability to communicate with each other. Speaking out loud can quickly express how we feel to our family, friends and colleagues.

I was a relatively shy person in my younger years. Though I later enjoyed a career in broadcasting by using the spoken word to inform and occasionally (I hope!) entertain.

On a recent visit to the Exmouth Deaf Academy, I was suddenly aware that I’ve taken for granted this way to communicate for far too long. It was a sobering moment of reflection on the way deaf people live their lives and the challenges they face, many of which most of us won’t ever experience.

I was invited by the principal to have a tour of the new school building and meet with members of the student council.

We are blessed to have such an exceptional school on our doorstep with a first-class and national reputation. 50 students attend from across the country. State-of-the-art uncluttered classrooms provide the perfect learning environment. And many students use their residential care facilities too.

It was a real pleasure to speak with the students who briefed me about their campaign to ensure that a British Sign Language interpreter should always be provided by broadcasters during televised government press conferences.

One student gave me pause for thought. She often feels left behind because not every television channel or platform carries an interpreter. This makes her feel like she is the last to know about the latest developments or changes that affect everyone in our society. The official government social media accounts and the BBC News Channel now include an interpreter. But not every broadcaster does the same.

I feel this is an issue that must be raised further to ensure nobody in our society feels left out. It really hit home the importance of including everyone in the way we all communicate. I plan to make some enquiries to see how we can make progress on this matter and see if it’s possible for every broadcaster to provide an interpreter.

The students also told me about another of their campaigns. They aim to reduce the speed limit outside their school and install a zebra crossing on Douglas Avenue. Most schools have a 20mph speed limit on the road directly adjacent to the school. Given the specialist nature of the Deaf Academy, I believe it’s especially important in this case and I have given them my full support.

Cllr Christine Channon, who represents the local area on Devon County Council, is also supportive of the plans. She’s confirmed that funding has been identified for signage and the zebra crossing, and there will be a planned consultation with the community regarding reducing the speed limit. I hope local residents will agree that it would be a sensible step to keep students safe.

We should be proud to have the Deaf Academy in East Devon and I will do what I can to support their objectives and campaigns.

This column first appeared in the Exmouth Journal on Wednesday 2nd June 2021 and in the Sidmouth Herald and Midweek Herald later in the week.