Weekly column: Looking back at a busy year as East Devon's MP 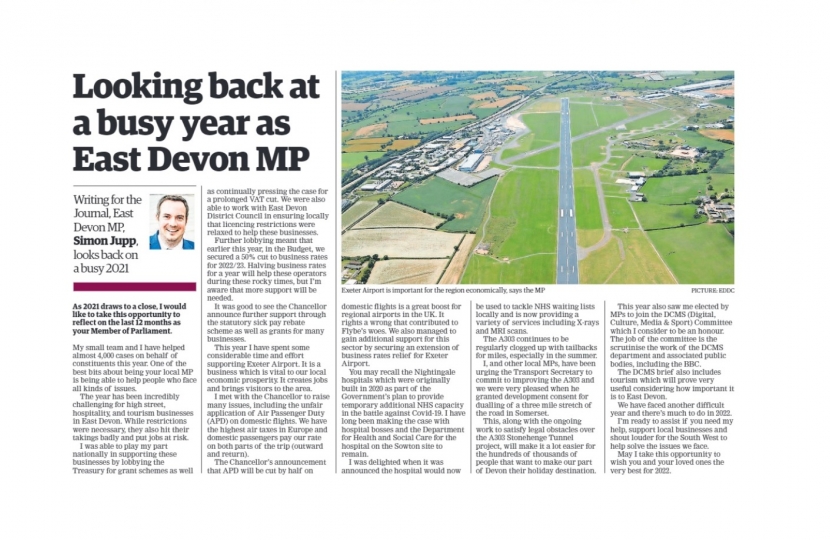 As 2021 draws to a close, I would like to take this opportunity to reflect on the last 12 months as your Member of Parliament.

My small team and I have helped almost 4,000 cases on behalf of constituents this year. One of the best bits about being your local MP is being able to help people who face all kinds of issues.

The year has been incredibly challenging for high street, hospitality, and tourism businesses in East Devon. While restrictions were necessary, they also hit their takings badly and put jobs at risk.

I was able to play my part nationally in supporting these businesses by lobbying the Treasury for grant schemes as well as continually pressing the case for a prolonged VAT cut. We were also able to work with East Devon District Council in ensuring locally that licencing restrictions were relaxed to help these businesses.

Further lobbying meant that earlier this year, in the Budget, we secured a 50% cut to business rates for 2022/23. Halving business rates for a year will help these operators during these rocky times, but I’m aware that more support will be needed.

It was good to see the Chancellor announce further support through the statutory sick pay rebate scheme as well as grants for many businesses.

This year I have spent some considerable time and effort supporting Exeter Airport. It is a business which is vital to our local economic prosperity. It creates jobs and brings visitors to the area.

I met with the Chancellor to raise many issues, including the unfair application of Air Passenger Duty (APD) on domestic flights. We have the highest air taxes in Europe and domestic passengers pay our rate on both parts of the trip (outward and return).

The Chancellor’s announcement that APD will be cut by half on domestic flights is a great boost for regional airports in the UK. It rights a wrong that contributed to Flybe’s woes. We also managed to gain additional support for this sector by securing an extension of business rates relief for Exeter Airport.

You may recall the Nightingale hospitals which were originally built in 2020 as part of the Government’s plan to provide temporary additional NHS capacity in the battle against Covid-19. I have long been making the case with hospital bosses and the Department for Health and Social Care for the hospital on the Sowton site to remain.

I was delighted when it was announced the hospital would now be used to tackle NHS waiting lists locally and is now providing a variety of services including X-rays and MRI scans.

The A303 continues to be regularly clogged up with tailbacks for miles, especially in the summer.

I, and other local MPs, have been urging the Transport Secretary to commit to improving the A303 and we were very pleased when he granted development consent for dualling of a three mile stretch of the road in Somerset.

This, along with the ongoing work to satisfy legal obstacles over the A303 Stonehenge Tunnel project, will make it a lot easier for the hundreds of thousands of people that want to make our part of Devon their holiday destination.

This year also saw me elected by MPs to join the DCMS (Digital, Culture, Media & Sport) Committee which I consider to be an honour. The job of the committee is the scrutinise the work of the DCMS department and associated public bodies, including the BBC.

The DCMS brief also includes tourism which will prove very useful considering how important it is to East Devon.

We have faced another difficult year and there’s much to do in 2022. I’m ready to assist if you need my help, support local businesses and shout louder for the South West to help solve the issues we face.

May I take this opportunity to wish you and your loved ones the very best for 2022.

This column first appeared in the Exmouth Journal on Wednesday 29th December 2021 and in the Sidmouth Herald and Midweek Herald in the same week.