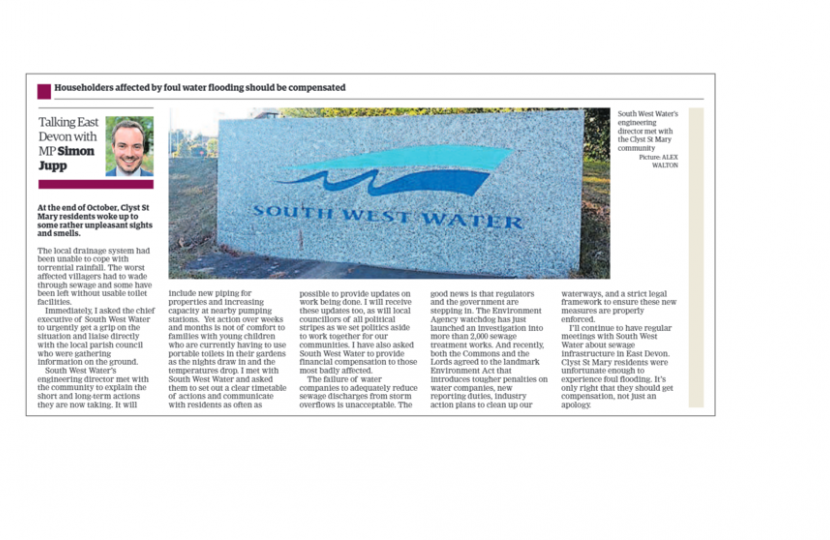 At the end of October, Clyst St Mary residents woke up to some rather unpleasant sights and smells.

The local drainage system had been unable to cope with torrential rainfall. The worst affected villagers have had to wade through sewage and some have been left without usable toilet facilities.

Immediately, I asked the chief executive of South West Water to urgently get a grip on the situation and liaise directly with the local parish council who were gathering information on the ground.

South West Water’s engineering director met with the community to explain the short and long-term actions they are now taking. It will include new piping for properties and increasing capacity at nearby pumping stations.

Yet action over weeks and months is not of comfort to families with young children who are currently having to use portaloos in their gardens as the nights draw in and the temperatures drop. I met with South West Water and asked them to set out a clear timetable of actions and communicate with residents as often as possible to provide updates on work being done. I will receive these updates too, as will local councillors of all political stripes as we set politics aside to work together for our communities. I have also asked South West Water to provide financial compensation to those most badly affected.

The failure of water companies to adequately reduce sewage discharges from storm overflows is unacceptable. The good news is that regulators and government are stepping in. The Environment Agency watchdog has just launched an investigation into more than 2,000 sewage treatment works. And recently, both the Commons and the Lords agreed the landmark Environment Act that introduces tougher penalties on water companies, new reporting duties, industry action plans to clean up our waterways, and a strict legal framework to ensure these new measures are properly enforced.

I’ll continue to have regular meetings with South West Water about sewage infrastructure in East Devon. Clyst St Mary residents were unfortunate enough to experience foul flooding. It’s only right that they should get compensation, not just an apology.

Since writing this column, South West Water has agreed to pay compensation to those affected by this flooding and those eligible will be contacted by the company. We will be having further meetings to ensure they adhere to their timeline of activity agreed with the Clyst St Mary community to permanently fix the flooding problems in the area. If you have any problems of a similar nature and you are a constituent of mine, please contact me via my website and I will do my best to help.

This column first appeared in the Exmouth Journal on Wednesday 24th November 2021 and in the Sidmouth Herald and Midweek Herald later in the week.