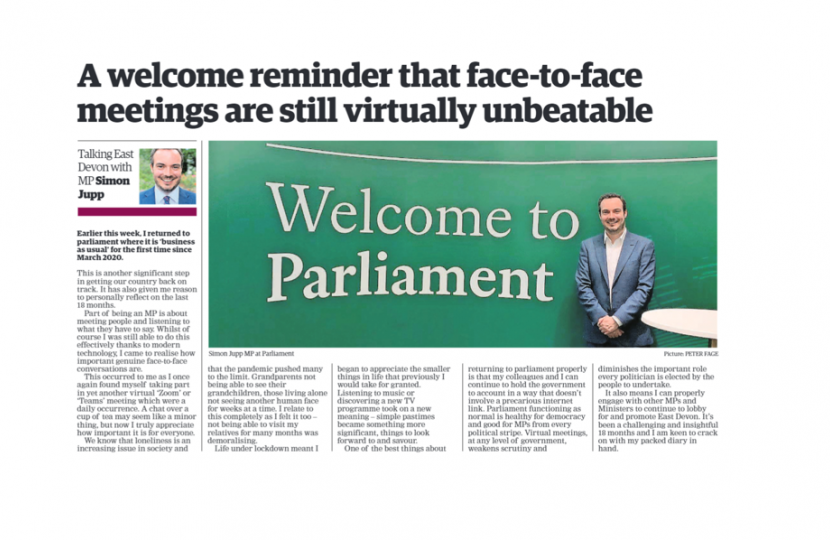 Earlier this week, I returned to parliament where it is ‘business as usual’ for the first time since March 2020. This is another significant step in getting our country back on track. It has also given me reason to personally reflect on the last 18 months.

Part of being an MP is about meeting people and listening to what they have to say. Whilst of course I was still able to do this effectively thanks to modern technology, I came to realise how important genuine face-to-face conversations are.

This occurred to me as I once again found myself taking part in yet another virtual ‘Zoom’ or ‘Teams’ meeting which were a daily occurrence. A chat over a cup of tea may seem like a minor thing, but now I truly appreciate how important it is for everyone.

We know that loneliness is an increasing issue in society and that the pandemic pushed many to the limit. Grandparents not being able to see their grandchildren, those living alone not seeing another human face for weeks at a time. I relate to this completely as I felt it too – not being able to visit my relatives for many months was demoralising.

Life under lockdown meant I began to appreciate the smaller things in life that previously I would take for granted. Listening to music or discovering a new TV programme took on a new meaning – simple pastimes became something more significant, things to look forward to and savour.

One of the best things about returning to parliament properly is that my colleagues and I can continue to hold the government to account in a way that doesn’t involve a precarious internet link. Parliament functioning as normal is healthy for democracy and good for MPs from every political stripe. Virtual meetings, at any level of government, weakens scrutiny and diminishes the important role every politician is elected by the people to undertake.

It also means I can properly engage with other MPs and Ministers to continue to lobby for and promote East Devon. It’s been a challenging and insightful 18 months and I am keen to crack on with my packed diary in hand.

This column first appeared in the Exmouth Journal on Wednesday 8th September and in the Sidmouth Herald and Midweek Herald later in the week.