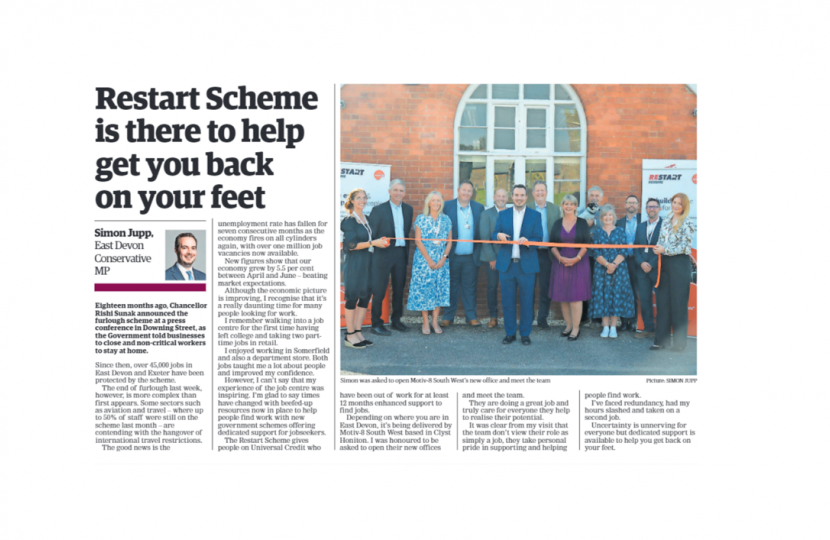 18 months ago, the Chancellor Rishi Sunak announced the furlough scheme at a press conference in Downing Street, as the government told businesses to close and non-critical workers to stay at home.

Since then, over 45,000 Jobs in East Devon and Exeter have been protected by the scheme.

The end of furlough last week, however, is more complex than first appears. Some sectors such as aviation and travel – where up to 50% of staff were still on the scheme last month – are contending with the hangover of international travel restrictions.

The good news is the unemployment rate has fallen for seven consecutive months as the economy fires on all cylinders again, with over one million job vacancies now available. New figures show that our economy grew by 5.5 per cent between April and June – beating market expectations.

Although the economic picture is improving, I recognise that it’s a really daunting time for many people looking for work. I remember walking into a job centre for the first time having left college and taking two part-time jobs in retail. I enjoyed working in Somerfield and also a department store. Both jobs taught me a lot about people and improved my confidence.

However, I can’t say that my experience of the job centre was inspiring. I’m glad to say that times have changed with beefed up resources now in place to help people find work with new government schemes offering dedicated support for jobseekers.

The Restart Scheme gives people on Universal Credit who have been out of work for at least 12 months enhanced support to find jobs. Depending on where you are in East Devon, it’s being delivered by Motiv-8 South West based in Clyst Honiton. I was honoured to be asked to open their new offices and meet the team. They are doing a great job and truly care for everyone they help to realise their potential. It was clear from my visit that the team don’t view their role as simply a job, they take personal pride in supporting and helping people find work.

I’ve faced redundancy, had my hours slashed and taken on a second job. Uncertainty is unnerving for everyone but dedicated support is available to help you get back on your feet.

This column first appeared on the Exmouth Journal on Wednesday 6th October 2021 and in the Sidmouth Herald and in the Midweek Herald later in the week.

Huge thanks to the staff & volunteers at the Exeter Vaccination Centre run by the RD&E at Greendale Business Park. Since the centre first opened at Westpoint, they’ve delivered an incredible 250,000 jabs.