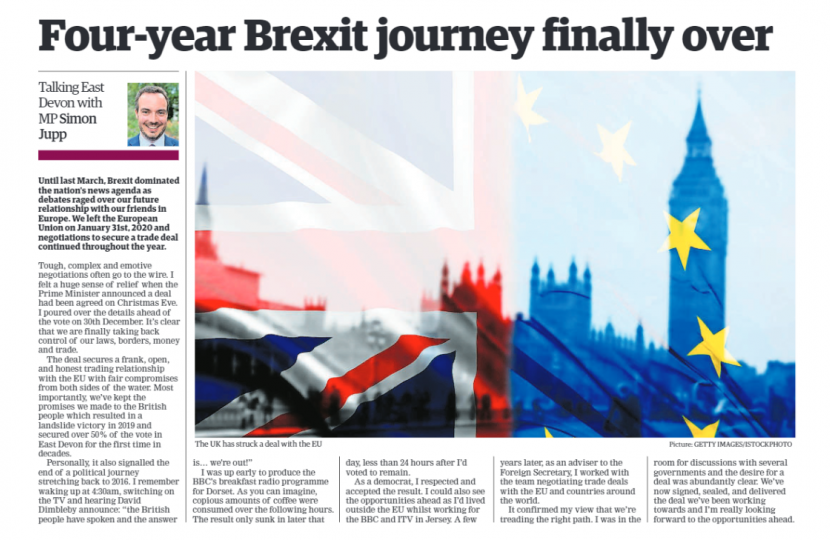 Until last March, Brexit dominated the nation's news agenda as debates raged over our future relationship with our friends in Europe. We left the European Union on January 31st, 2020 and negotiations to secure a trade deal continued throughout the year.

Tough, complex and emotive negotiations often go to the wire. I felt a huge sense of relief when the Prime Minister announced a deal had been agreed on Christmas Eve. I poured over the details ahead of the vote on 30th December. It’s clear that we are finally taking back control of our laws, borders, money and trade.

The deal secures a frank, open, and honest trading relationship with the EU with fair compromises from both sides of the water. Most importantly, we’ve kept the promises we made to the British people which resulted in a landslide victory in 2019 and secured over 50% of the vote in East Devon for the first time in decades.

Personally, it also signalled the end of a political journey stretching back to 2016. I remember waking up at 4:30am, switching on the TV and hearing David Dimbleby announce: “the British people have spoken and the answer is… we're out!”

I was up early to produce the BBC’s breakfast radio programme for Dorset. As you can imagine, copious amounts of coffee were consumed over the following hours. The result only sunk in later that day, less than 24 hours after I’d voted to remain.

As a democrat, I respected and accepted the result. I could also see the opportunities ahead as I’d lived outside the EU whilst working for the BBC and ITV in Jersey. A few years later, as an adviser to the Foreign Secretary, I worked with the team negotiating trade deals with the EU and countries around the world.

It confirmed my view that we’re treading the right path. I was in the room for discussions with several governments and the desire for a deal was abundantly clear. We’ve now signed, sealed, and delivered the deal we’ve been working towards and I’m really looking forward to the opportunities ahead.

This column first appeared in the Exmouth Journal on Wednesday 6th January 2021.

Covid test may be daunting but protecting vulnerable is essential

New and previously daunting experiences are now commonplace. I joined the many thousands in our area who’ve had a test during this pandemic as I went for my first coronavirus test at the Honiton Park and Ride site last week.