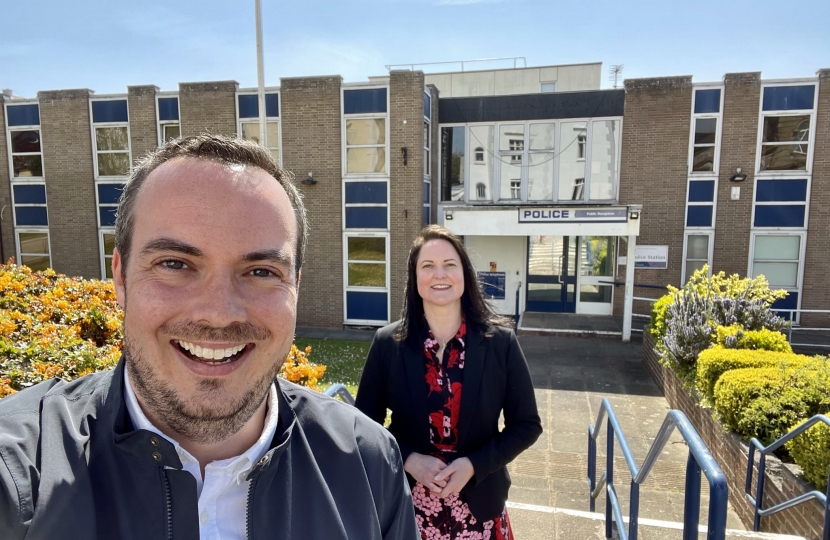 Exmouth, one of Devon’s largest towns with thousands of visitors every year, will get a brand new police station fit for the future. It’s truly fantastic news for the town I am very proud to represent.

I have been working closely with Alison Hernandez, the Police and Crime Commissioner for Devon, Cornwall and the Isles of Scilly since I was elected in December 2019. And now, Exmouth is getting serious investment to help keep the community safe with a new state-of-the-art police station.

Let’s be honest, the current police station is an ageing eyesore. I certainly won’t miss it. Neither will nearby residents nor our local police officers who deserve a far better place to work from.

Given the government’s on-going success towards achieving its commitment to recruit 20,000 new police officers, coupled with a clear desire from local residents to have a proper police station in Exmouth, I was able to work closely with the Police & Crime Commissioner and Chief Constable to look again at how we deliver policing locally.

We are set to have a record number of police officers across Devon & Cornwall. Numbers are due to hit 3,610 in the financial year from April. This is 110 more than the area’s previous high of 3,500 in 2009/2010 under the previous Labour government.

New officers will join experienced staff at the new police station in Exmouth. The current site will be redeveloped with part of the land sold to help fund the construction of the new police station on the existing site. A new project team has now been set up to design and deliver the new station. The team tasked with designing the new building will include an area for face-to-face contact between the police and the public.

As well as being one of the largest towns in Devon, Exmouth, along with other coastal communities in the county, has a range of specific challenges when it comes to policing compared to cites or towns in more urban areas.

As we know, Exmouth sees a large increase in population throughout the summer months due to visitors and tourism because so many people want to enjoy our superb beach, restaurants, leisure facilities and pubs. This can be quite a challenge for our local coppers and police staff, so it’s vital they have a modern local base from which to serve the needs of our community throughout the year.

This is the second major investment in local policing in the East Devon constituency since I was elected. I also look after Topsham and St Loyes in Exeter. In April 2020, the city also got a brand-new police station on Sidmouth Road, next to Devon and Cornwall Police’s Middlemoor headquarters. At a cost of £29m, this replaced the ageing Heavitree station.

All this investment is part of the Police and Crime Commissioner’s ongoing multi-million-pound modernisation programme and I am in no doubt that the new Exmouth policing base will further strengthen policing in the town.

Policing is constantly changing as our local populations increase and there are growing demands on our officers. Last year in Exmouth, the Town Council launched a new CCTV system at various locations in the town because the old system was no longer fit for purpose.

I have sat in the control room of this CCTV network and the technology is amazing in terms of what can be seen and where. Whilst chiefly acting as a deterrent, it allows the police to look at footage from across town following any reported incidents. It’s working really well, with many success stories already!

With a new police station for Exmouth, more officers in Devon and Cornwall than ever before, and a state-of-the-art CCTV system now up sand running in Exmouth, it demonstrates significant investment in our town, the right resources to keep us safe and a real commitment to law and order in East Devon.

This column was published by DevonLive and the Express & Echo.

It’s a truly wonderful school with the community at its heart. I’m looking forward to welcoming one of the classes to Parliament later this year.