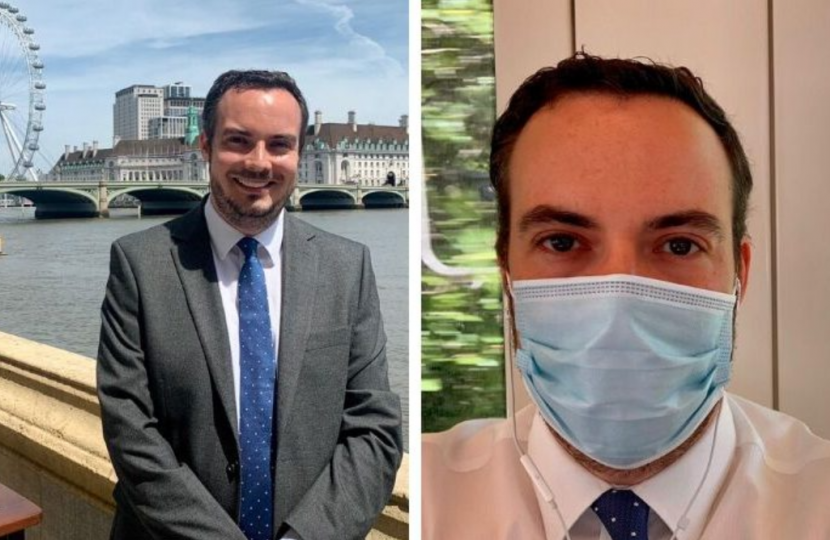 I hope you’ve safely enjoyed the stunning weather we’ve had in recent weeks. I have managed to visit several pubs and restaurants in East Devon who are taking part in the Eat Out to Help Out scheme. I really enjoyed speaking to many people working in hospitality who all told me it’s great to be busy again and safely back to work.

I’ve continued to hold weekly surgeries throughout August and I’ve found more and more people stopping me in the street to have a chat. From the young lad who’s a full-time carer for his mum in Exmouth to the couple who invited me to visit their church in Sidmouth, I’ve appreciated every conversation.

There’s no doubt that confidence is growing in our communities as we re-open society. I’m really encouraged by the continued low level of cases of coronavirus despite our popularity amongst tourists of all ages.

The re-opening of our schools is yet another sign that we are winning the battle against the virus. I’m sure you’d agree that it’s incredibly important to get the next generation safely back to school and college to continue their education. I’ve spoken with head teachers and visited Exeter College to see the steps they are taking to keep students safe. I want the next generation to learn, debate and thrive rather than feel defined by an algorithm.

Another benefit of schools and colleges returning is the chance to see friends, build up their confidence, social skills and reflect on the news stories of the day. We have so many ways of finding out what’s happening on our doorstep and further afield. The Express and Echo has served our communities for over a century and Devon Live continues to flourish as the internet and social media become the way young people read about the latest news.

The way information is shared on social media presents both an opportunity to reach more people and highlights the importance of proper journalism to help defeat pseudo websites masquerading as legitimate sources of news.

I’m really concerned by some of the recent rhetoric bandied around on the future of the BBC. As a former BBC manager and journalist, I don’t feel the BBC has a left or right bias, more a metropolitan bias which can make parts of the corporation feel and sound distant from places including East Devon, despite excellent local services including BBC Radio Devon and Spotlight.

As the new BBC Director General gets his feet under his desk on his first week in the job, the scale of the task ahead of him is one few would envy. Whether it's trying to reconnect with younger audiences, looking at alternatives to the licence fee or making sure the BBC is fit for its digital future, it's clear Tim Davie has a tough job ahead. A key concern of mine is that BBC staff are reminded regularly of the importance of impartiality on air and on social media. We all have our own views, and they can be hard to keep to yourself, but it is vital that both the BBC's news coverage and its journalists are impartial. This is critical for the long-term survival of the BBC.

If the licence fee is scrapped, we would see familiar faces and voices disappear from our region and fewer programmes which have undoubtedly helped bring about positive change including Blue Planet, Louis Theroux and Panorama. I recognise the faults and flaws we see and hear all too often from good old auntie, but we often don’t know what we’ve got until it’s gone.

Like you, I’ve carefully considered the Internal Market Bill. I reviewed my own concerns and those of the many emails I’ve received on this topic before deciding how to vote on this legislation.

A lot of what the Bill does has been lost in the furore in Parliament and in the media.